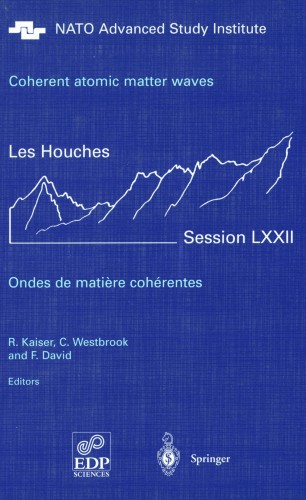 Progress in atomic physics has been so vigorous during the past decade that one is hard pressed to follow all the new developments. In the early 1990s the first atom interferometers opened a new field in which we have been able to use the wave nature of atoms to probe fundamental quantum me chanics questions as well as to make precision measurements. Coming fast on the heels of this development was the demonstration of Bose Einstein condensation in dilute atomic vapors which intensified research interest in studying the wave nature of matter, especially in a domain in which "macro scopic" quantum effects (vortices, stimulated scattering of atomic beams) are visible. At the same time there has been much progress in our understanding of the behavior of waves (notably electromagnetic) in complex media, both periodic and disordered. An obvious topic of speculation and probably of future research is whether any new insight or applications will develop if one examines the behavior of de Broglie waves in analogous situations. Finally, our ability to manipulate atoms has allowed us not only to create macroscopically occupied quantum states but also to exercise fine control over the quantum states of a small number of atoms. This has advanced to the study of quantum entanglement and its relation to the theory of measurement and the theory of information. The 1990s have also seen an explosion of interest in an exciting potential application of this fine control: quantum computation and quantum cryptography.