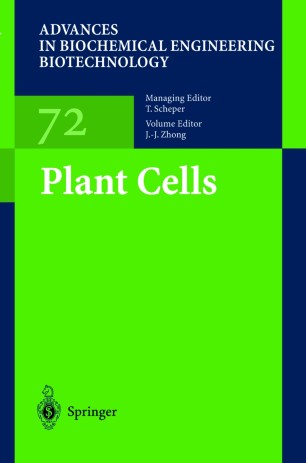 Plants produce more than 30,000 types of chemicals, including pharmaceuticals, pigments and other fine chemicals, which is four times more than those obtain ed from microbes. Plant cell culture has been receiving great attention as an alternative for the production of valuable plant derived secondary metabolites, since it has many advantages over whole plant cultivation. However, much more research is required to enhance the culture productivity and reduce the pro cessing costs, which is the key to the commercialization of plant cell culture pro cesses. The recent achievements in related biochemical engineering studies are reviewed in Chapter 1. The effect of gaseous compounds on plant cell behavior has been little studied, and Chapter 2 focuses on these gas concentration effects (including oxygen, carbon dioxide, ethylene and others, such as volatile hor mones like methyl jasmonate) on secondary metabolite production by plant cell cultures. Two metabolites of current interest, i. e. , the antimalarial artemisinin (known as "qing hao su" in China) that is produced by Artemisia annua (sweet wormwood) and taxanes used for anticancer therapy that are produced by species of Taxus, are taken as examples. Bioprocess integration is another hot topic in plant cell culture technology. Because most of the plant secondary meta bolites are toxic to the cells at high concentrations during the culture, removal of the product in situ during the culture can lead to the enhanced productivity. Various integrated bioprocessing techniques are discussed in Chapter 3.