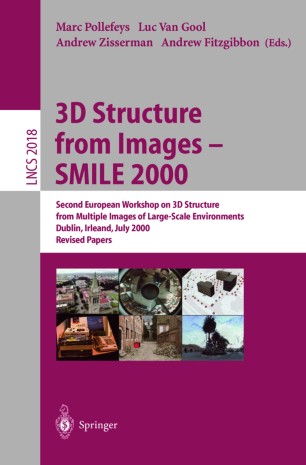 This volume contains the ?nal version of the papers originally presented at the second SMILE workshop 3D Structure from Multiple Images of Large-scale Environments, which was held on 1-2 July 2000 in conjunction with the Sixth European Conference in Computer Vision at Trinity College Dublin. The subject of the workshop was the visual acquisition of models of the 3D world from images and their application to virtual and augmented reality. Over the last few years tremendous progress has been made in this area. On the one hand important new insightshavebeenobtainedresultinginmore exibilityandnewrepresentations.Onthe other hand a number of techniques have come to maturity, yielding robust algorithms delivering good results on real image data. Moreover supporting technologies – such as digital cameras, computers, disk storage, and visualization devices – have made things possible that were infeasible just a few years ago. Opening the workshop was Paul Debevec s invited presentation on image-based modeling,rendering,andlighting.Hepresentedanumberoftechniquesforusingdigital images of real scenes to create 3D models, virtual camera moves, and realistic computer animations.Theremainderoftheworkshopwasdividedintothreesessions:Computation and Algorithms, Visual Scene Representations, and Extended Environments. After each session there was a panel discussion that included all speakers. These panel discussions were organized by Bill Triggs, Marc Pollefeys, and Tomas Pajdla respectively, who introduced the topics and moderated the discussion. Asubstantialpartoftheseproceedingsarethetranscriptsofthediscussionsfollowing each paper and the full panel sessions. These discussions were of very high quality and were an integral part of the workshop.