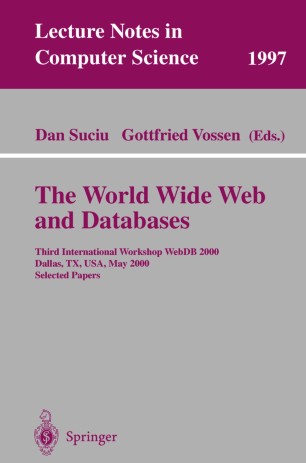 WebDB: International Workshop on the World Wide Web and Databases

The World Wide Web and Databases

With the development of the World-Wide Web, data management problems have branched out from the traditional framework in which tabular data is processed under the strict control of an application, and address today the rich variety of information that is found on the Web, considering a variety of ?exible envir- ments under which such data can be searched, classi ed , and processed. Da- base systems are coming forward today in a new role as the primary backend for the information provided on the Web. Most of today’s Web accesses trigger some form of content generation from a database, while electronic commerce often triggers intensive DBMS-based applications. The research community has begun to revise data models, query languages, data integration techniques, - dexes, query processing algorithms, and transaction concepts in order to cope with the characteristics and scale of the data on the Web. New problems have been identi ed , among them goal-oriented information gathering, management of semi-structured data, or database-style query languages for Web data, to name just a few. The International Workshop on the Web and Databases (WebDB) is a series of workshops intended to bring together researchers interested in the interaction between databases and the Web. This year’s WebDB 2000 was the third in the series, and was held in Dallas, Texas, in conjunction with the ACM SIGMOD International Conference on Management of Data.