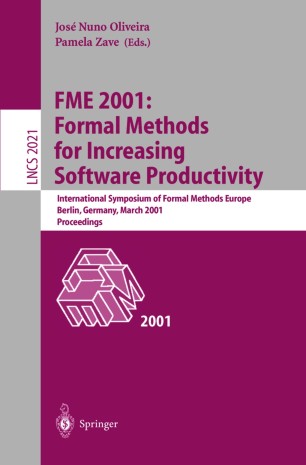 FME 2001 is the tenth in a series of meetings organized every eighteen months by Formal Methods Europe (FME), an independent association whose aim is to stimulate the use of, and research on, formal methods for software development. It follows four VDM Europe Symposia, four other Formal Methods Europe S- posia, and the 1999 World Congress on Formal Methods in the Development of Computing Systems. These meetings have been notably successful in bringing - gether a community of users, researchers, and developers of precise mathematical methods for software development. FME 2001 took place in Berlin, Germany and was organized by the C- puter Science Department of the Humboldt-Universit¨at zu Berlin. The theme of the symposium was Formal Methods for Increasing Software Productivity. This theme recognizes that formal methods have the potential to do more for industrial software development than enhance software quality { they can also increase productivity at many di erent points in the software life-cycle. The importance of the theme is borne out by the many contributed papers showing how formal methods can make software development more e cient. There is an emphasis on tools that nd errors automatically, or with relatively little human e ort. There is also an emphasis on the use of formal methods to assist with critical, labor-intensive tasks such as program design and test-case generation.