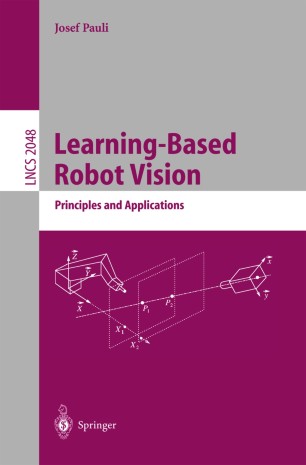 Industrial robots carry out simple tasks in customized environments for which it is typical that nearly all e?ector movements can be planned during an - line phase. A continual control based on sensory feedback is at most necessary at e?ector positions near target locations utilizing torque or haptic sensors. It is desirable to develop new-generation robots showing higher degrees of autonomy for solving high-level deliberate tasks in natural and dynamic en- ronments. Obviously, camera-equipped robot systems, which take and process images and make use of the visual data, can solve more sophisticated robotic tasks. The development of a (semi-) autonomous camera-equipped robot must be grounded on an infrastructure, based on which the system can acquire and/or adapt task-relevant competences autonomously. This infrastructure consists of technical equipment to support the presentation of real world training samples, various learning mechanisms for automatically acquiring function approximations, and testing methods for evaluating the quality of the learned functions. Accordingly, to develop autonomous camera-equipped robot systems one must ?rst demonstrate relevant objects, critical situations, and purposive situation-action pairs in an experimental phase prior to the application phase. Secondly, the learning mechanisms are responsible for - quiring image operators and mechanisms of visual feedback control based on supervised experiences in the task-relevant, real environment. This paradigm of learning-based development leads to the concepts of compatibilities and manifolds. Compatibilities are general constraints on the process of image formation which hold more or less under task-relevant or accidental variations of the imaging conditions.