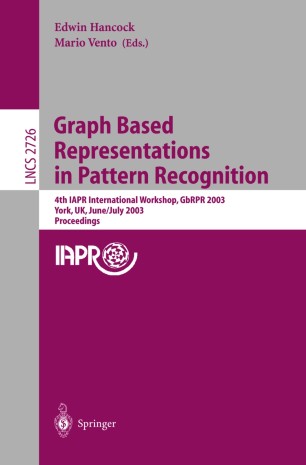 Graph Based Representations in Pattern Recognition

This volume contains the papers presented at the Fourth IAPR Workshop on Graph Based Representations in Pattern Recognition. The workshop was held at the King’s Manor in York, England between 30 June and 2nd July 2003. The previous workshops in the series were held in Lyon, France (1997), Haindorf, Austria (1999), and Ischia, Italy (2001). The city of York provided an interesting venue for the meeting. It has been said that the history of York is the history of England. There have been both Roman and Viking episodes. For instance, Constantine was proclaimed emperor in York. The city has also been a major seat of ecclesiastical power and was also involved in the development of the railways in the nineteenth century. Much of York’s history is evidenced by its buildings, and the King’s Manor is one of the most important and attractive of these. Originally part of the Abbey, after the dissolution of the monasteries by Henry VIII, the building became a center of government for the Tudors and the Stuarts (who stayed here regularly on their journeys between London and Edinburgh), serving as the headquarters of the Council of the North until it was disbanded in 1561. The building became part of the University of York at its foundation in 1963. The papers in the workshop span the topics of representation, segmentation, graph-matching, graph edit-distance, matrix and spectral methods, and gra- clustering.