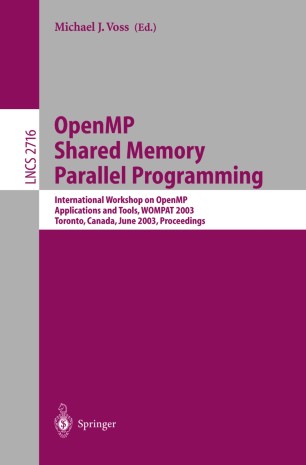 This book contains the proceedings of the Workshop on OpenMP Applications and Tools, WOMPAT 2003. WOMPAT 2003 was held on June 26and 27, 2003 in Toronto, Canada. The workshop brought together the users and developers of the OpenMP API to meet, share ideas and experiences, and to discuss the latest developments in OpenMP and its applications. The OpenMP API is now a widely accepted standard for high-level shar- memory parallel programming. Since its introduction in 1997, OpenMP has gained support from the majority of high-performance compiler and hardware vendors. WOMPAT 2003 was the latest in a series of OpenMP-related workshops, which have included the annual o?erings of the Workshop on OpenMP Appli- tions and Tools (WOMPAT), the European Workshop on OpenMP (EWOMP) and the Workshop on OpenMP: Experiences and Implementations (WOMPEI). The WOMPAT 2003 program committee formally solicited papers. Extended abstracts were submitted by authors and all abstracts were reviewed by three members of the program committee. Of the 17 submitted abstracts, 15 were selected for presentation at the workshop. This book was published in time to be available at WOMPAT 2003, and therefore we hope that the papers contained herein are timely and useful for current developers and researchers. This book also contains selected papers from WOMPAT 2002. No formal proceedings had been created for this previous o?ering of the workshop, and so presenters were invited to prepare their papers for inclusion in this volume.