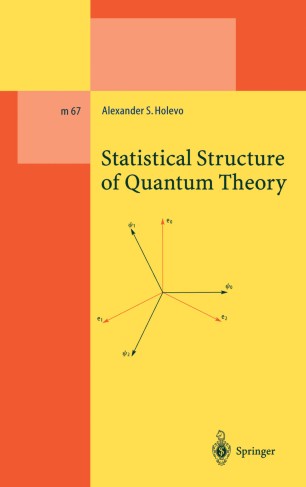 New ideas on the mathematical foundations of quantum mechanics, related to the theory of quantum measurement, as well as the emergence of quantum optics, quantum electronics and optical communications have shown that the statistical structure of quantum mechanics deserves special investigation. In the meantime it has become a mature subject. In this book, the author, himself a leading researcher in this field, surveys the basic principles and results of the theory, concentrating on mathematically precise formulations. Special attention is given to the measurement dynamics. The presentation is pragmatic, concentrating on the ideas and their motivation. For detailed proofs, the readers, researchers and graduate students, are referred to the extensively documented literature.

"The philosophy that guides the presentation is that though quantum theory does have a dynamical aspect, a predominant part of the theory is simply about a new kind of probabilistic model for expressing uncertainties of various kinds. [...] All the lectures in this book are presented in the author’s characteristic no-nonsense style, making it a gem of a reference work. The bibliography, in fact, is a rich source of material, indispensable for filling in how to actually derive all the advertised results. The clear-cut purpose of the monograph is not to go through the mechanics of each theorem, but to paint a picture in modern art. Throughout, there is an emphasis on how each and every quantum result differs from its analog in the classical probabilistic model. One does, however, fear that a central illuminating thread is somehow missing from the exposition, though the author cannot be blamed: It is a thread no one has yet seen. [...] In the mean time, though, an exposition like this is part of the necessary journey." (Quantum Information and Computation 3/2, 2003)

"The probabilistic structure of quantum theory has been investigated since the well-known monograph of J. von Neumann Mathematical Foundations of Quantum Mechanics [...]. The present book deals with the further development of the theory, namely with the modern consistent quantum statistical theory that was created in the 1970-80s as a logical extension of the statistical interpretation based on the mathematical foundation of modern functional analysis. [...] The book is written clearly and is self-contained. It will be useful for both mathematicians and physicists interested in the foundations of quantum mechanics." (Zentralblatt MATH, 999/24, 2002)