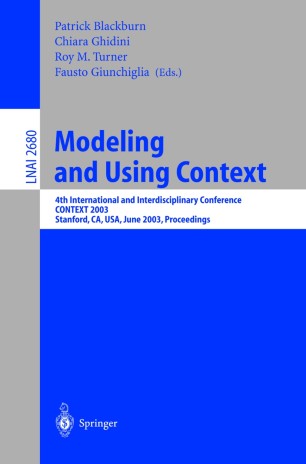 CONTEXT: International and Interdisciplinary Conference on Modeling and Using Context

Whetheryouareacomputerscientist,alogician,aphilosopher,orapsychologist, it is crucial to understand the role that context and contextual information plays in reasoning and representation. The conference at which the papers in this volume were presented was the fourth in an international series devoted to research on context, and was held in Stanford (USA) on June 23–25, 2003. The ?rst conference in the series was held in Rio de Janeiro (Brazil) in 1997, the second was held in Trento (Italy) in 1999, and the third was held in Dundee (Scotland, UK) in 2001. CONTEXT2003 brought together representative work from many di?erent ?elds: in this volume you will ?nd philosophical theorizing, logical formalization, computationalmodelling—and,indeed,computationalapplications—together with work that approaches context from a more cognitive orientation. While we don’t believe that this volume can capture the lively ?avor of discussion of the conference itself, we do hope that researchers interested in context (in any of its many manifestations) will ?nd something of interest here, perhaps something that will inspire new lines of work. We are very grateful to our invited speakers: Patrick Br´ ezillon (University of Paris VI, France), Keith Devlin (CSLI, Stanford), and David Leake (Indiana University, USA) for presenting three important contemporary perspectives on the study on context.