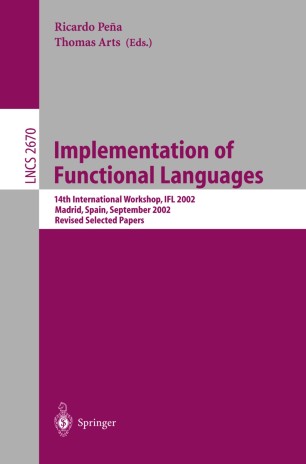 IFL: Symposium on Implementation and Application of Functional Languages

The International Workshops on the Implementation of Functional Languages (IFL)havebeenrunningfor14yearsnow.Theaimoftheseworkshopsistobring together researchers actively engaged in the implementation and application of functional programming languages to discuss new results and new directions of research. A non-exhaustive list of topics includes: language concepts, type che- ing, compilation techniques, (abstract) interpretation, automatic program g- eration, (abstract) machine architectures, array processing, concurrent/parallel programming and program execution, heap management, runtime pro?ling and performance measurements, debugging and tracing, veri?cation of functional programs, tools and programming techniques. The 14th edition, IFL 2002, was held in Madrid, Spain in September 2002. It attracted47researchersfromthefunctionalprogrammingcommunity,belonging to10di?erentcountries.Duringthethreedaysoftheworkshop,34contributions were presented, covering most of the topics mentioned above. The workshop was sponsored by several Spanish public institutions: the M- istry of Science and Technology, Universidad Complutense de Madrid, and the Tourism O?ce, Town Hall and Province Council of Segovia, a small Roman and medieval city near Madrid. We thank our sponsors for their generous contri- tions. This volume follows the lead of the last six IFL workshops in publishing a high-quality subset of the contributions presented at the workshop in Springer’s Lecture Notes in Computer Science series. All speakers attending the workshop were invited to submit a revised version for publication. A total of 25 papers were submitted. Each one was reviewed by four PC members and thoroughly discussed by the PC. The results of this process are the 15 papers included in this volume.