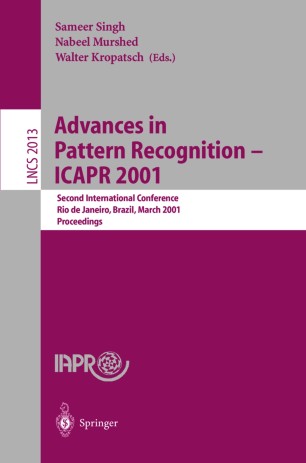 The paper is organized as follows: In section 2, we describe the no- orientation-discontinuity interfering model based on a Gaussian stochastic model in analyzing the properties of the interfering strokes. In section 3, we describe the improved canny edge detector with an ed- orientation constraint to detect the edges and recover the weak ones of the foreground words and characters; In section 4, we illustrate, discuss and evaluate the experimental results of the proposed method, demonstrating that our algorithm significantly improves the segmentation quality; Section 5 concludes this paper. 2. The norm-orientation-discontinuity interfering stroke model Figure 2 shows three typical samples of original image segments from the original documents and their magnitude of the detected edges respectively. The magnitude of the gradient is converted into the gray level value. The darker the edge is, the larger is the gradient magnitude. It is obvious that the topmost strong edges correspond to foreground edges. It should be noted that, while usually, the foreground writing appears darker than the background image, as shown in sample image Figure 2(a), there are cases where the foreground and background have similar intensities as shown in Figure 2(b), or worst still, the background is more prominent than the foreground as in Figure 2(c). So using only the intensity value is not enough to differentiate the foreground from the background. (a) (b) (c) (d) (e) (f)