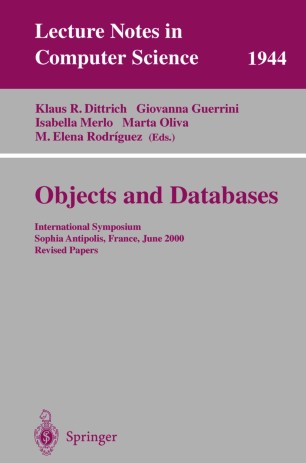 These post-proceedings contain the revised versions of the papers presented at the \Symposium on Objects and Databases" which was held in Sophia-Antipolis, France, June 13, 2000, in conjunction with the Fourteenth European Conference on Object-Oriented Programming, ECOOP 2000. This event continued the t- dition established the year before in Lisbon (Portugal) with the First Workshop on Object-Oriented Databases. The goal of the symposium was to bring together researchers working in various corners of the eld of objects and databases, to discuss the current state of research in the eld and to critically evaluate existing solutions in terms of their current usage, their successes and limitations, and their potential for new applications. The organizing committee received 21 papers which were reviewed by a p- gram committee of people active in the eld of objects and databases. There were 3 reviews for each paper, and nally the organizing committee selected 9 long papers, 2 short papers, and a demonstration to be presented and discussed at the symposium. The selected papers cover a wide spectrum of topics, including data modeling concepts, persistent object languages, consistency and integrity of persistent data, storage structures, class versioning and schema evolution, query languages, and temporal object-oriented databases. In addition to the regular papers, the symposium included an invited p- sentation, given by Prof. Malcolm Atkinson from the University of Glasgow (Scotland) where he heads the Persistence and Distribution Group.