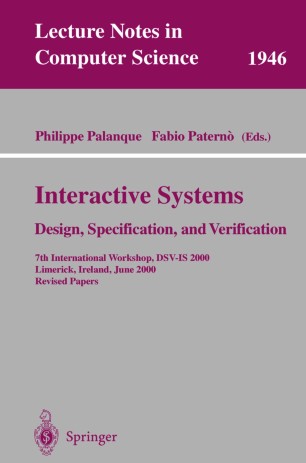 The wait for the year 2000 was marked by the fear of possible bugs that might have arisen at its beginning. One additional fear we had during this wait was whether - ganising this event would have generated a boon or another bug. The reasons for this fear originated in the awareness that the design of interactive systems is a fast moving area. The type of research work presented at this unique event has received limited support from funding agencies and industries making it more difficult to keep up with the rapid technological changes occurring in interaction technology. However, despite our fear, the workshop was successful because of the high-quality level of participation and discussion. Before discussing such results, let us step back and look at the evolution of DSV-IS (Design, Specification and Verification of Interactive Systems), an international wo- shop that has been organised every year since 1994. The first books that addressed this issue in a complete and thorough manner were the collection of contributions edited by Harrison and Thimbleby and the book written by Alan Dix, which focused on abstractions useful to highlight important concepts in the design of interactive systems. Since then, this area has attracted the interest of a wider number of research groups, and some workshops on related topics started to be organised. DSV-IS had its origins in this spreading and growing interest. The first workshop was held in a monastery located in the hills above Bocca di Magra (Italy).