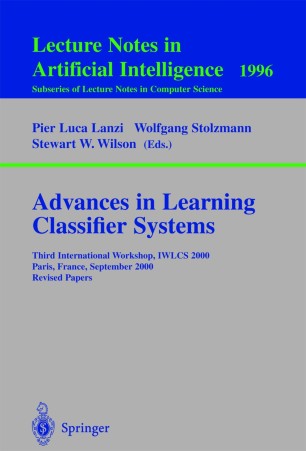 Learning classi er systems are rule-based systems that exploit evolutionary c- putation and reinforcement learning to solve di cult problems. They were - troduced in 1978 by John H. Holland, the father of genetic algorithms, and since then they have been applied to domains as diverse as autonomous robotics, trading agents, and data mining. At the Second International Workshop on Learning Classi er Systems (IWLCS 99), held July 13, 1999, in Orlando, Florida, active researchers reported on the then current state of learning classi er system research and highlighted some of the most promising research directions. The most interesting contri- tions to the meeting are included in the book Learning Classi er Systems: From Foundations to Applications, published as LNAI 1813 by Springer-Verlag. The following year, the Third International Workshop on Learning Classi er Systems (IWLCS 2000), held September 15{16 in Paris, gave participants the opportunity to discuss further advances in learning classi er systems. We have included in this volume revised and extended versions of thirteen of the papers presented at the workshop.