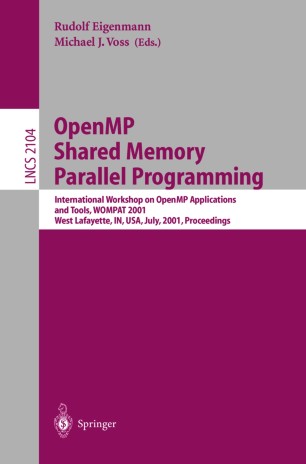 This book contains the presentations given at the Workshop on OpenMP App- cations and Tools, WOMPAT 2001. The workshop was held on July 30 and 31, 2001 at Purdue University, West Lafayette, Indiana, USA. It brought together designers, users, and researchers of the OpenMP application programming int- face. OpenMP has emerged as the standard for shared memory parallel progr- ming. For the rst time, it is possible to write parallel programs that are portable across the majority of shared memory parallel computers. WOMPAT 2001 s- ved as a forum for all those interested in OpenMP and allowed them to meet, share ideas and experiences, and discuss the latest developments of OpenMP and its applications. WOMPAT 2001 was co-sponsored by the OpenMP Architecture Review Board (ARB). It followed a series of workshops on OpenMP, including WOMPAT 2000, EWOMP 2000, and WOMPEI 2000. For WOMPAT 2001, we solicited papers formally and published them in the form of this book. The authors submitted extended abstracts, which were reviewed by the program committee. All submitted papers were accepted. The authors were asked to prepare a nal paper in which they addressed the reviewers comments. The proceedings, in the form of this book, were created in time to be available at the workshop. In this way, we hope to have brought out a timely report of ongoing OpenMP-related research and development e orts as well as ideas for future improvements.