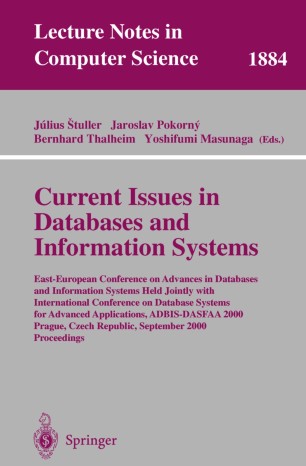 The East European Conference on Advances in Databases and Information - stems (ADBIS) is the successor of the annual International Workshops with the same title that during 1993{1996 were organized in Russia by the Moscow ACM SIGMOD Chapter. Initiated in St. Petersburg, Russia, in 1997, it con- nued in Poznan, Poland, in 1998 and in Maribor, Slovenia, in 1999. The ADBIS Conference became the premier database and information systems conference in Eastern Europe. It intended to increase interaction and collaboration b- ween researchers from the East and the West, and to provide an internationally recognized tribune for the presentation of research results. The International Conference on Database Systems for Advanced Appli- tions (DASFAA) was rst held in Seoul, Korea, in 1989 to promote database research and development activities in Asian and Australasian countries. The Special Interest Group of Database Systems (SIGDBS) of the Information P- cessing Society of Japan (IPSJ) and the Special Interest Group of Data Base (SIGDB) of Korea Information Science Society (KISS) had important roles in the organization of DASFAA. Since that time the DASFAA has been held e- ry two years: Tokyo in 1991, Daejon in 1993, Singapore in 1995, Melbourne in 1997, and Taiwan in 1999. The DASFAA became one of the most prestigious international conferences ever held in Asia or Australasia.