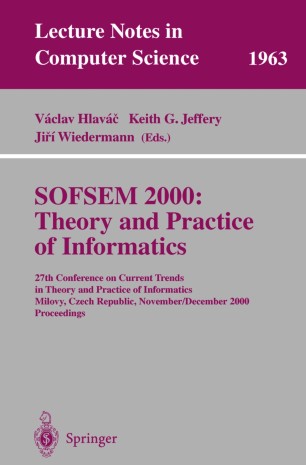 SOFSEM: International Conference on Current Trends in Theory and Practice of Computer Science

SOFSEM 2000: Theory and Practice of Informatics

The international conference on current trends in the theory and practice of informatics SOFSEM 2000 was held 25 November–2 December 2000 in the c- ference facilities of the Dev?et Skal (Nine Rocks) Hotel, Milovy, Czech-Moravian Highlands, the Czech Republic. It was already the 27th annual meeting in the series of SOFSEM conferences organized in either the Czech or the Slovak Rep- lic. Since its establishment in 1974, SOFSEM has gone through a long dev- opment in parallel with the entire ?eld of informatics. Currently SOFSEM is a wide-scope, multidisciplinary conference, with stress on the interplay between the theory and practice of informatics. The SOFSEM scienti?c program consists mainly of invited talks which determine the topics of the conference. Invited talks are complemented by short refereed talks contributed by SOFSEM parti- pants. The topics of invited talks are chosen so as to cover the span from theory to practice and to bring interesting research areas to the attention of conf- ence participants. For the year 2000, the following three streams were chosen for presentation by the SOFSEM Steering Committee: – Trends in Algorithmics – Information Technologies in Practice – Computational Perception The above streams were covered through 16 invited talks given by prominent researchers. There were 18 contributed talks also presented, chosen by the int- national Program Committee from among 36 submitted papers. The program also included a panel on lessons learned from the Y2K problem.