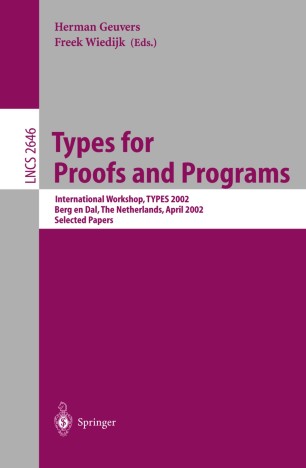 These proceedings contain a refereed selection of papers presented at the Second Annual Workshop of the Types Working Group (Computer-Assisted Reasoning based on Type Theory, EUIST project 29001), which was held April 24–28, 2002 in Hotel Erica, Berg en Dal (close to Nijmegen), The Netherlands. The workshop was attended by about 90 researchers. On April 27, there was a special afternoon celebrating the 60th birthday of Per Martin-L¨of, one of the founding fathers of the Types community. The afternoon consisted of the following three invited talks: “Constructive Validity Revisited” by Dana Scott, “From the Rules of Logic to the Logic of Rules” by Jean-Yves Girard, and “The Varieties of Type Theories” by Peter Aczel. The contents of these contributions were not laid down in these proceedings, but the videos of the talks and the slides used by the speakers are available at http://www. cs. kun. nl/fnds/MartinLoefDay/LoefTalks. htm The previous workshop of the Types Working Group under EUIST project 29001 was held in 2000 in Durham, UK. The workshops Types 2000 and Types 2002 followed a series of meetings organized in the period 1993 – 1999 whithin previous Types projects (ESPRIT BRA 6435 and ESPRIT Working Group 21900). The proceedings of these earlier Types workshops were also published in the LNCS series, as volumes 806, 996, 1158, 1512, 1657, 1956 and 2277. ESPRIT BRA 6453 was a continuation of ESPRIT Action 3245, Logical Frameworks: - sign, Implementation and Experiments.