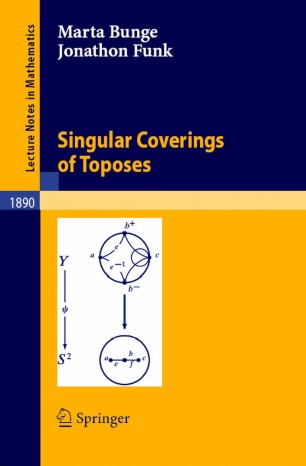 The self-contained theory of certain singular coverings of toposes called complete spreads, that is presented in this volume, is a field of interest to topologists working in knot theory, as well as to various categorists. It extends the complete spreads in topology due to R. H. Fox (1957) but, unlike the classical theory, it emphasizes an unexpected connection with topos distributions in the sense of F. W. Lawvere (1983). The constructions, though often motivated by classical theories, are sometimes quite different from them. Special classes of distributions and of complete spreads, inspired respectively by functional analysis and topology, are studied. Among the former are the probability distributions; the branched coverings are singled out amongst the latter.

This volume may also be used as a textbook for an advanced one-year graduate course introducing topos theory with an emphasis on geometric applications. Throughout the authors emphasize open problems. Several routine proofs are left as exercises, but also as ‘exercises’ the reader will find open questions for possible future work in a variety of topics in mathematics that can profit from a categorical approach.