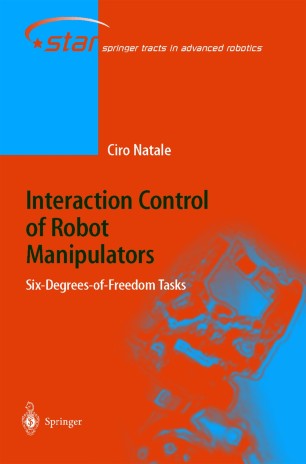 Robot interaction control is one of the most challenging targets for industrial robotics. While it would provide the robotic systems with a high degree of autonomy, its effectiveness is limited by the complexity of this problem and by the necessity of special sensors (six-degrees of freedom force sensors). On the other hand, the control methodologies to be adopted for addressing this problem can be considered mature and well-assessed. All the known interaction control strategies (e.g., impedance, direct force control) are tackled and reshuffled in a geometrically consistent way for simplification of the task specification and enhancement of the execution performance. This book represents the first step towards the application of theoretical results at an industrial level; in fact each proposed control algorithm is experimentally tested here on an industrial robotic setup.

"Very well written ion a concise manner and reader-friendly lucid manner. The development of equations, notations, and graphics is very easy to follow and intuitive. The book provides adequate case studies and graphics to illustrate the theoretical underpinnings of the technical discussions. Also included are a good list of references… Ciro Natale has made an outstanding contribution through this book and his work will have a long-term impact on robotics research worldwide."