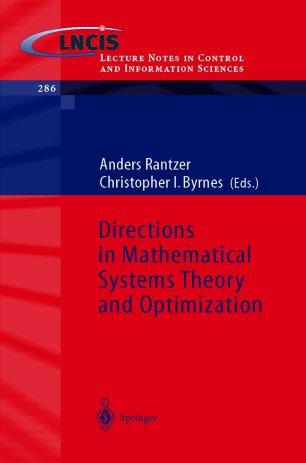 For more than three decades, Anders Lindquist has delivered fundamental cont- butions to the ?elds of systems, signals and control. Throughout this period, four themes can perhaps characterize his interests: Modeling, estimation and ?ltering, feedback and robust control. His contributions to modeling include seminal work on the role of splitting subspaces in stochastic realization theory, on the partial realization problem for both deterministic and stochastic systems, on the solution of the rational covariance extension problem and on system identi?cation. His contributions to ?ltering and estimation include the development of fast ?ltering algorithms, leading to a nonlinear dynamical system which computes spectral factors in its steady state, and which provide an alternate, linear in the dimension of the state space, to computing the Kalman gain from a matrix Riccati equation. His further research on the phase portrait of this dynamical system gave a better understanding of when the Kalman ?lter will converge, answering an open question raised by Kalman. While still a student he established the separation principle for stochastic function differential equations, including some fundamental work on optimal control for stochastic systems with time lags. He continued his interest in feedback control by deriving optimal and robust control feedback laws for suppressing the effects of harmonic disturbances. Moreover, his recent work on a complete parameterization of all rational solutions to the Nevanlinna-Pick problem is providing a new approach to robust control design.