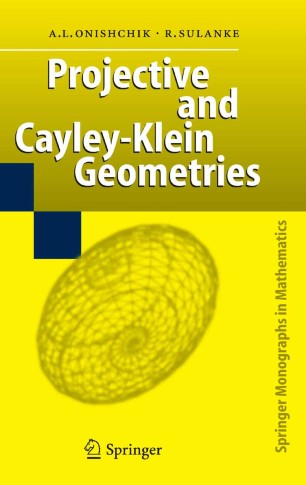 Projective geometry, and the Cayley-Klein geometries embedded into it, were originated in the 19th century. It is one of the foundations of algebraic geometry and has many applications to differential geometry.

The book presents a systematic introduction to projective geometry as based on the notion of vector space, which is the central topic of the first chapter. The second chapter covers the most important classical geometries which are systematically developed following the principle founded by Cayley and Klein, which rely on distinguishing an absolute and then studying the resulting invariants of geometric objects.

An appendix collects brief accounts of some fundamental notions from algebra and topology with corresponding references to the literature.

This self-contained introduction is a must for students, lecturers and researchers interested in projective geometry.

"This book is a comprehensive account of projective geometry and other classical geometries … exhaustively covering all the details that anyone could ever ask for. It is well-written and the many exercises and many figures … make it a very usable text. … My proposed audience for this book coincides with the publisher’s advice: graduate students and researchers in mathematics will find this book most useful … . For these readers, the book is a jewel long yearned for, and finally found." (Gizem Karaali, MathDL, November, 2007)