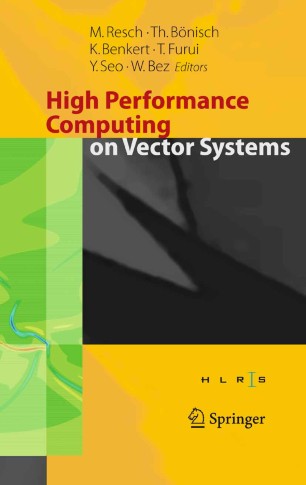 InMarch2005about40scientistsfromEurope,JapanandtheUScametogether the second time to discuss ways to achieve sustained performance on superc- puters in the range of Tera?ops. The workshop held at the High Performance Computing Center Stuttgart (HLRS) was the second of this kind. The ?rst one had been held in May 2004. At both workshops hardware and software issues were presented and applications were discussed that have the potential to scale and achieve a very high level of sustained performance. The workshops are part of a collaboration formed to bring to life a concept that was developed in 2000 at HLRS and called the “Tera?op Workbench”. The purpose of the collaboration into which HLRS and NEC entered in 2004 was to turn this concept into a real tool for scientists and engineers. Two main goals were set out by both partners: • To show for a variety of applications from di?erent ?elds that a sustained level of performance in the range of several Tera?ops is possible. • To show that di?erent platforms (vector based systems, cluster systems) can be coupled to create a hybrid supercomputer system from which applications can harness an even higher level of sustained performance.