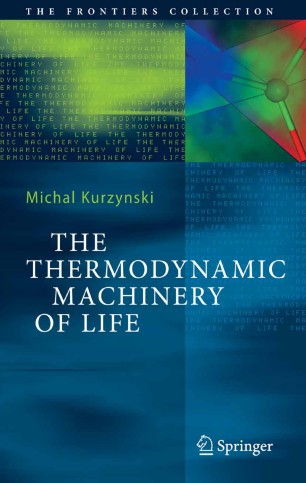 The Thermodynamic Machinery of Life

Living organisms are open thermodynamic systems whose functional structure has developed and been kinetically frozen during the historical process of biological evolution. A thermodynamics of both nonequilibrium and complex systems is needed for their description. In this book, the foundations of such a thermodynamics are presented. Biological processes at the cellular level are considered as coupled chemical reactions and transport processes across internal and the cytoplasmic membrane. All these processes are catalyzed by specific enzymes hence the kinetics of enzymatic catalysis and its control are described here in detail. The coupling of several processes through a common enzyme is considered in the context of free energy or signal transduction. Special attention is paid to evidence for a rich stochastic internal dynamics of native proteins and its possible role in the control of enzyme activity and in the action of biological molecular machines.