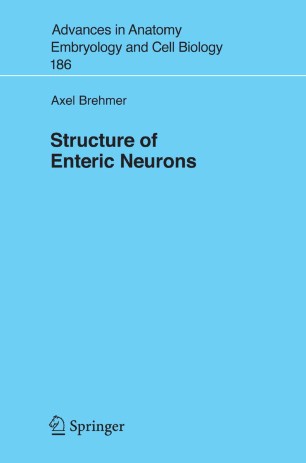 1 Introduction The plexuses of Auerbach and Meissner are peculiar to the gut; they extend from the beginning of the unstriated portion of the oesophagus to the end of the rectum. They have usually been considered to belong to the sympathetic system, but it appears to me preferable to place them in a class by themselves. We may speak of them as forming the enteric nervous system. (Langley 1900) In this context,itislessimportant that Langleyexcludedthe striated part of the oesophagus from his de?nition of the enteric nervous system (ENS). Much more remarkable seems to be that for Langley, a physiologist, structural reasons were the most decisive for taking the nervous system within the wall of the gastrointestinal tract as an entity unto itself. On the one hand, he argued that enteric nerve cells differ in their histological character from those in para- and prevertebral ganglia. On the other hand, there were few connections of enteric nerve plexuses with the central nervous system (CNS) through sympathetic or other autonomic nerves (which had already been described, however; Auerbach 1862). In his later, more famous monograph, he divided the autonomic nerves into three groups: sympathetic, parasympathetic and intestinal nerves (Langley 1921). This division seems to be all the more modern considering that, during the following decades, many authors and textbooks moved away from this division. The signi?cance of enteric neurons was reduced to that of postganglionic relay stations of vegetative nerves (Müller 1921; Lawrentjew 1929; Botár et al. 1942).