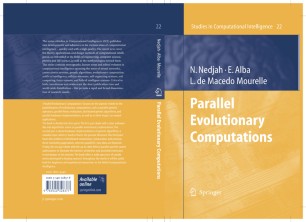 "Parallel Evolutionary Computation" focuses on the aspects related to the parallelization of evolutionary computations, such as parallel genetic operators, parallel fitness evaluation, distributed genetic algorithms, and parallel hardware implementations, as well as on their impact on several applications.
The book is divided into four parts. The first part deals with a clear software-like and algorithmic vision on parallel evolutionary optimizations. The second part is about hardware implementations of genetic algorithms, a valuable topic which is hard to find in the present literature. The third part treats the problem of distributed evolutionary computation and presents three interesting applications wherein parallel EC new ideas are featured. Finally, the last part deals with the up-to-date field of parallel particle swarm optimization to illustrate the intrinsic similarities and potential extensions to techniques in this domain. The book offers a wide spectrum of sample works developed in leading research throughout the world about parallel implementations of efficient techniques at the heart of computational intelligence. It will be useful both for beginners and experienced researchers in the field of computational intelligence.