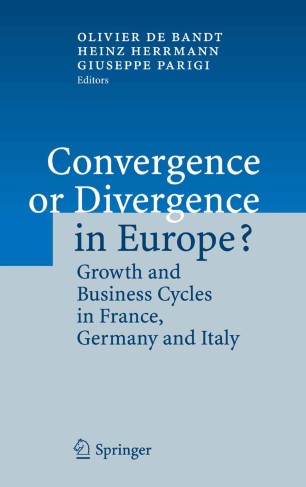 Convergence or Divergence in Europe?

Growth and Business Cycles in France, Germany and Italy

Against the background of the introduction of the euro in 1999, France, Germany and Italy have recently experienced higher divergence in terms of GDP growth. Indeed, there is no consensus among economists regarding the effects of monetary union, which can lead either to more specialisation as in the United States, or to increasing intra-industry trade, hence higher co-movements. Based on a set of original papers produced by a team of economists from the three main National Central Banks of the euro area, presented to an International Conference held in Paris as well as the contributions of panel of leading economists, the book analyses the latest developments in three largest European economies in a broad perspective, using modern econometric techniques. One of the conclusions is that, while business cycles are more strongly correlated across the three countries, as evidenced by the common reaction to the 2001 slowdown, the three countries still exhibit differences in terms of long term growth.