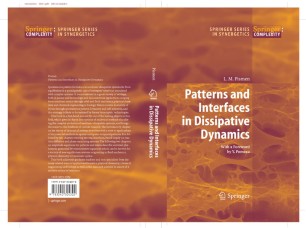 Patterns and Interfaces in Dissipative Dynamics

Spontaneous pattern formation in nonlinear dissipative systems far from equilibrium is a paradigmatic case of emergent behaviour associated with complex systems. It is encountered in a great variety of settings, both in nature and technology, and has numerous applications ranging from nonlinear optics through solid and fluid mechanics, physical chemistry and chemical engineering to biology. Nature creates its variety of forms through spontaneous pattern formation and self-assembly, and this strategy is likely to be imitated by future biomorphic technologies.

This book is a first-hand account by one of the leading players in this field, which gives in-depth descriptions of analytical methods elucidating the complex evolution of nonlinear dissipative systems, and brings the reader to the forefront of current research. The introductory chapter on the theory of dynamical systems is written with a view to applications of its powerful methods to spatial and spatio-temporal patterns. It is followed by two chapters treating moving interfaces, based largely on reaction-diffusion and phase-separating systems. The following two chapters on amplitude equations for patterns and waves describe universal phenomena generated by representative equations which can be derived for a variety of non-equilibrium systems originating in fluid mechanics, physical chemistry or nonlinear optics.

This book addresses graduate students and non-specialists from the many related areas of applied mathematics, physical chemistry, chemical engineering and biology, as well as the seasoned scientist in search of a modern source of reference.