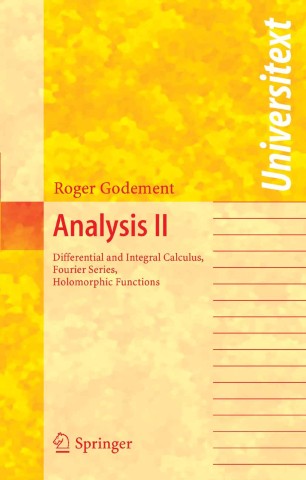 Functions in R and C, including the theory of Fourier series, Fourier integrals and part of that of holomorphic functions, form the focal topic of these two volumes. Based on a course given by the author to large audiences at Paris VII University for many years, the exposition proceeds somewhat nonlinearly, blending rigorous mathematics skilfully with didactical and historical considerations. It sets out to illustrate the variety of possible approaches to the main results, in order to initiate the reader to methods, the underlying reasoning, and fundamental ideas. It is suitable for both teaching and self-study. In his familiar, personal style, the author emphasizes ideas over calculations and, avoiding the condensed style frequently found in textbooks, explains these ideas without parsimony of words. The French edition in four volumes, published from 1998, has met with resounding success: the first two volumes are now available in English.

Roger Godement (October 1, 1921 - July 21, 2016) is known for his work in functional analysis, and also his expository books. He started as a student at the École normale supérieure in 1940, where he became a student of Henri Cartan. He started research into harmonic analysis on locally compact abelian groups, finding a number of major results; this work was in parallel but independent of similar investigations in the USSR and Japan. Work on the abstract theory of spherical functions published in 1952 proved very influential in subsequent work, particularly that of Harish-Chandra. The isolation of the concept of square-integrable representation is attributed to him. The Godement compactness criterion in the theory of arithmetic groups was a conjecture of his. He later worked with Jacquet on the zeta function of a simple algebra. He was an active member of the Bourbaki group in the early 1950s, and subsequently gave a number of significant Bourbaki seminars. He also took part in the Cartan seminar. He also wrote texts on Lie groups, abstract algebra and mathematical analysis.

From the reviews of the original French edition:

"... The content is quite classical ... [...] The treatment is less classical: precise although unpedantic (rather far from the definition-theorem-corollary-style), it contains many interesting commentaries of epistemological, pedagogical, historical and even political nature. [...] The author gives frequent interesting hints on recent developments of mathematics connected to the concepts which are introduced. The Introduction also contains comments that are very unusual in a book on mathematical analysis, going from pedagogy to critique of the French scientific-military-industrial complex, but the sequence of ideas is introduced in such a way that readers are less surprised than they might be.
J. Mawhin in Zentralblatt Mathematik (1999)