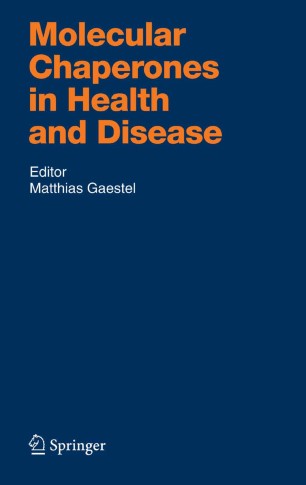 Molecular Chaperones in Health and Disease

Molecular chaperones are involved in a wide variety of essential cellular processes in living cells. A subset of molecular chaperones have been initially described as heat shock proteins protecting cells from stress damage by keeping cellular proteins in a folding competent state and preventing them from irreversible aggregation. Later it became obvious that molecular chaperones are also expressed constitutively in the cell and are involved in complex processes such as protein synthesis, intracellular protein transport, post-translational modification and secretion of proteins as well as receptor signalling. Hence, it is not surprising that molecular chaperones are implicated in the pathogenesis of many relevant diseases and could be regarded as potential pharmacological targets. Starting with the analysis of the mode of action of chaperones at the molecular, cellular and organismic level, this book will then describe specific aspects where modulation of chaperone action could be of pharmacological and therapeutic interest.