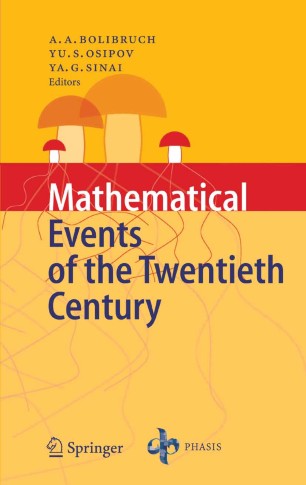 Mathematical Events of the Twentieth Century

Russian mathematics (later Soviet mathematics, and Russian mathematics once again) occupies a special place in twentieth-century mathematics. In addition to its well-known achievements, Russian mathematics established a unique style of research based on the existence of prominent mathematical schools. These schools were headed by recognized leaders, who became famous due to their talents and outstanding contributions to science. The present collection is intended primarily to gather in one book the t- timonies of the participants in the development of mathematics over the past century. In their articles the authors have expressed their own points of view on the events that took place. The editors have not felt that they had a right to make any changes, other than stylistic ones, or to add any of their own commentary to the text. Naturally, the points of view of the authors should not be construed as those of the editors. The list of mathematicians invited to participate in the present edition was quite long. Unfortunately, some of the authors for various reasons did not accept our invitation, and regretfully a number of areas of research are not fully represented here. Nevertheless, the material that has been assembled is of great value not only in the scientific sense, but also in its historical context. We wish to express our gratitude to all the authors who contributed.