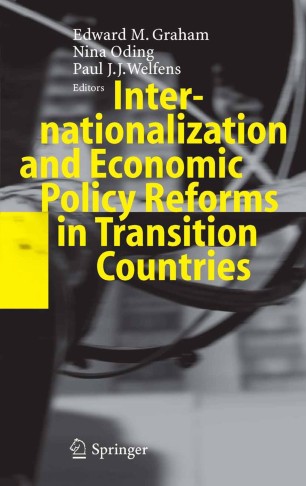 Edward M. Graham, Nina Oding and Paul J. J. Welfens Eastern Europe and the former Soviet Union have achieved sustained economic growth in first half of the new decade in the 2V^ century. EU ac­ cession countries which have joined the EU have benefited mainly from high capital inflows, a reduced risk premium - with shadow effects of this already occurring in the years before explicit membership - and growing trade. While system transformation has undermined trade between Eastern Europe and Russia for several years there are medium prospects for grow­ ing trade in the whole of Europe. Russia's case, however, is different from the EU accession countries as a major driving force of economic dynamics is the oil and gas sector which has considerable backward and forward linkages. At the same time this sector apparently is politically quite sensi­ tive. The Transatlantic Transformation and Economic Development Re­ search Group has organized several workshops within a major interna­ tional research project. The project is devoted to analyzing the internatio­ nalization of the Russian economy and the associated changes in major policy fields. This book contains the revised analytical papers from the St. Petersburg conference in 2003 when the city celebrated its 300 year anniversary. We are very grateful to the Leontief Center for excellent organization of the conference. The paper by Paul J. J.