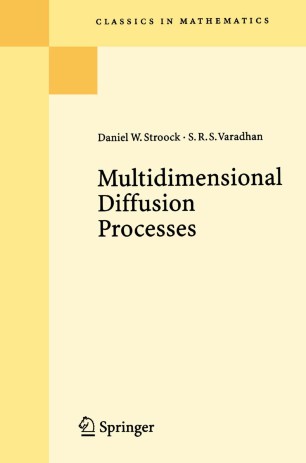 "… Both the Markov-process approach and the Itô approach … have been immensely successful in diffusion theory. The Stroock-Varadhan book, developed from the historic 1969 papers by its authors, presents the martingale-problem approach as a more powerful - and, in certain regards, more intrinsic-means of studying the foundations of the subject. […] … the authors make the uncompromising decision not "to proselytise by intimidating the reader with myriad examples demonstrating the full scope of the techniques", but rather to persuade the reader "with a careful treatment of just one problem to which they apply". […] Most of the main tools of stochastic-processes theory are used, ..but it is the formidable combination of probability theory with analysis … which is the core of the work. […] I have emphasized the great importance of the Stroock-Varadhan book. It contains a lot more than I have indicated; in particular, its many exercises conain much interesting material.
For immediate confirmation of the subject’s sparkle, virtuosity, and depth, see … McKean (‘s 1969 book). The Stroock-Varadhan book proceeds on its inexorable way like a massive Bach fugue. … But old J.S. can e something of knockout if his themes get hold of you. And his influence on what followed was 8you may say) substantial."
David Williams in the Bulletin of the American Mathematical Society