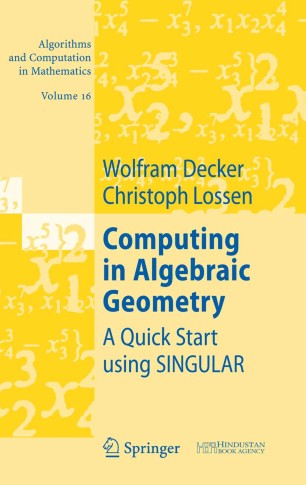 Part of the Algorithms and Computation in Mathematics book series (AACIM, volume 16)

Christoph Lossen is assistant professor (C2) of mathematics at the University of Kaiserslautern. His fields of interest are singularity theory and computer algebra. Since 2000, he is a member of the SINGULAR development team. He taught several courses on computer algebra methods with special emphasis on the needs of singularity theory, including international schools at Sao Carlos (Brazil, 2002), Allahabad (India, 2003) and Oberwolfach (Germany, 2003).

"Algebraic geometry generally studies the properties of solution sets of systems of polynomial equations without direct reference to the actual polynomials used in these systems. … This is especially desirable for classwork where the development of the abstract machinery generally outlasts the patience of the students, except possibly the most motivated ones. … However, the book can … be used in an introductory algebraic geometry course where the students will have the advantage of experimenting with examples as their knowledge grows." (A. Sinan Sertöz, Mathematical Reviews, Issue 2007 b)