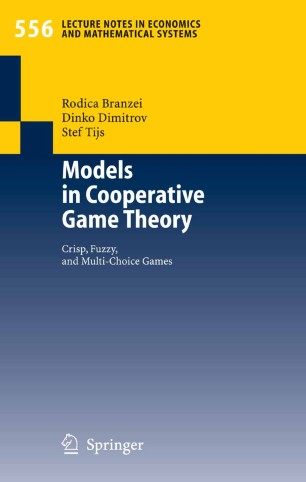 This book investigates the classical model of cooperative games with transfer­ able utility (TU-games) and models in which the players have the possibility to cooperate partially, namely fuzzy and multichoice games. In a crisp game the agents are either fully involved or not involved at all in cooperation with some other agents, while in a fuzzy game players are allowed to cooperate with infinitely many different participation levels, varying from non-cooperation to full cooperation. A multichoice game describes an intermediate case in which each player may have a fixed number of activity levels. Part I of the book is devoted to the most developed model in the theory of cooperative games, that of a classical TU-game with crisp coalitions, which we refer to as crisp game along the book. It presents basic notions, solutions concepts and classes of cooperative crisp games in such a way that allows the reader to use this part as a reference toolbox when studying the corresponding concepts from the theory of fuzzy games (Part II) and from the theory of multichoice games (Part III). The work on this book started while we were research fellows at ZiF (Biele­ feld) for the project "Procedural Approaches to Conflict Resolution", 2002.