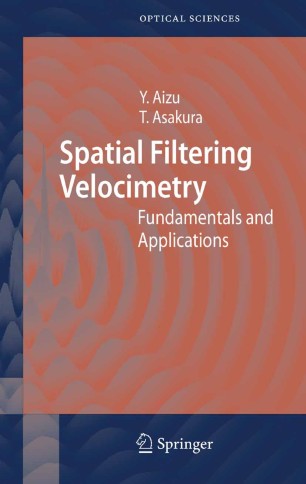 The first monograph devoted exclusively to spatial filtering velocimetry, this book includes fundamental theory, imaging optics, signal analysis, spatial filtering devices and systems, plus applications. Also suitable as a tutorial for students and users who are unfamiliar with optics and signal processing, Spatial Filtering Velocimetry treats the principle and properties of this velocimetric technique in a concise and easily readable form, together with full appendices. The book reviews a wide range of systems and applications of the spatial-filtering technique for velocity and related measurements, putting forth examples useful in various fields of science, medicine, and engineering.

Yoshihisa Aizu received the B. Eng. in electronics from Musashi Institute of Technology in 1980, and Ms. Eng. and Dr. Eng. in electronics from Hokkaido University in 1982 and 1985, respectively. From 1985 to 1989, he was a leader of a research group in the Chofu Laboratory of Kowa Company Limited in Tokyo. In 1989, he joined the Research Institute of Applied Electricity, Hokkaido University, as a research associate. From 1990, he was an associate professor at Muroran Institute of Technology. From 1992 to 1993, he was a visiting researcher at the fluid mechanics institute of University Erlangen, Germany. His current research activities are in the fields of optical velocimetry, optical particle measurements, laser speckles and their applications to scientific, industrial, and medical fields, and biomedical application of visible to near infrared spectroscopy. He is a member of SPIE, OSA, the Japan Society of Applied Physics, Optical Society of Japan, the Japan Society of Mechanical Engineering, and the Society of Instrument and Control Engineers, Japan.

Toshimitsu Asakura received his M.A. in 1960 from Boston University and his Dr.Eng. in 1965 from the University of Tokyo. He was a research assistant at the Physical Research Laboratories, Boston University, from 1957 to 1958 and a member of the research staff at the Research Laboratory of Itek Corporation from 1958 to 1961. In 1971 he was promoted to professor at the Research Institute of Applied Electricity, Hokkaido University. He was also guest professor at the International Cooperation Center, Tokyo Institute of Technology, since 1980. In 1997, he retired from Hokkaido University and moved to Hokkai-Gakuen University. From 2005, he is a president of Hokkai-Gakuen University. His work has been in optics and its related fields particularly in relation to the properties and applications of laser light. His research interests include the properties and applications of speckles, the laser Doppler and transmission-grating velocimetries, light-propagation properties in optical fibers, apodization theory, optical information processing, and applications of lasers to medical fields. He has written many papers in technical journals and other publications. Dr. Asakura is a fellow of the Optical Society of America, and a member of the International Society for Optical Engineering (SPIE), the Physical Society of Japan, the Japan Society of Applied Physics, the Institute of Electronics and Communication Engineers of Japan, the Institute of Electrostatistics of Japan, The Japan Society for Laser Medicine, the Laser Society of Japan, and the Physics Education Society of Japan. He received an Optics Paper Award from the Japan Society of Applied Physics in 1962, the Hokkaido Science and Technology Award in 1986, and several other awards.