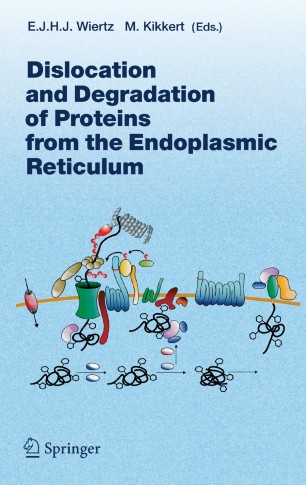 Dislocation and Degradation of Proteins from the Endoplasmic Reticulum

The present volume of Current Topics in Microbiology and Immunology c- tains seven chapters that illuminate various aspects of a protein’s genesis and terminal fate in the endoplasmic reticulum (ER). This area is of immediate medical relevance and has blossomed, to no small extent, because of the study of molecules central to the function of the immune system [immunogl- ulins, T cell receptors, major histocompatibility complex (MHC)-encoded products]. Similarly, the clever strategies used by bacteria or viruses to gain a foothold in the host and ensure their continued survival have uncovered altogether new cell biological principles. It is therefore ?tting that a special volume be devoted to the interplay between pathways of protein degradation in the ER and a wide variety of pathogens. The concept of quality control emerged with the appreciation that, in the case of multimeric glycoproteins, any unpaired glycoprotein subunit had great dif?culties leaving its site of synthesis—the ER—and was destroyed instead. Free immunoglobulin heavy chains were probably the earliest documented example of this kind, and were long known to cause pathology when their accumulation went unchecked. Increased knowledge of the biosynthetic pathways of glycoproteins allowed the identi?cation of the ER as an important site where such quality control decisions were made. The T cell receptor for antigen, long considered the paradigm of this mode of degradation, led the way in these early explorations.