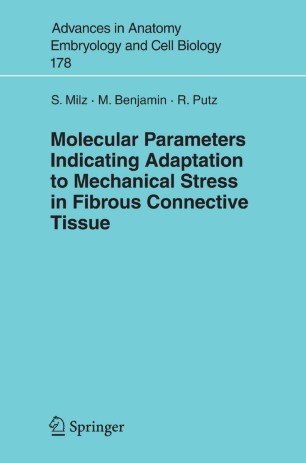 The present study pursues the hypothesis that local compressive force and the occurrence of cartilage-specific transformation processes within tendons and ligaments are directly correlated.

In selected anatomical samples of human origin the distribution pattern of certain components of the extracellular matrix is assessed. Investigations are carried out at the extensor tendons of toes and fingers, at the transverse ligament of the atlas, at the transverse ligament of the acetabulum, and at the tendon of the superior oblique muscle and its trochlea. The molecular components of the extracellular matrix are detected with standardized immunohistochemical methods.

The results show that certain molecules only occur due to compressive stress, others due to tensile stress. The molecular spectrum of the extracellular matrix allows qualifying conclusions to the mechanical situation of a given part of the tissue.

The spatial expansion of the fibrocartilaginous adaptation zones in tendons and ligaments roughly corresponds with the zones subjected to compressive force; tensile stress alone does not result in a production of fibrocartilage.