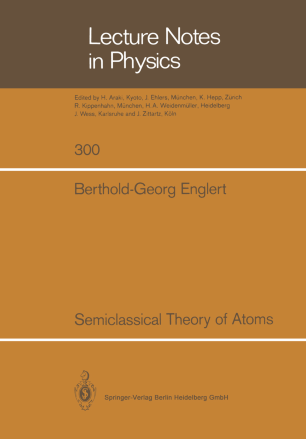 Semiclassical Theory of Atoms presents a novel approach to theoretical atomic physics. The fundamental quantity in this new, powerful formalism is the effective potential, not the density. The starting point is the highly semiclassical approximation known as the Thomas-Fermi model. It is studied in great detail, and then refined in three steps by adding quantum corrections successively according to their importance. First, the strongly bound electrons are treated in detail. Second, the bulk of electrons is better described by introducing quantum corrections to the Thomas-Fermi treatment and by including the exchange interaction. At this stage, predicted binding energies, for instance, are correct to within a small fraction of a percent. Third, shell effects are introduced. The improved semiclassical treatment is then sufficiently refined to reproduce the systematics of the Periodic Table. It addresses the graduate student with a good knowledge of elementary quantum mechanics.