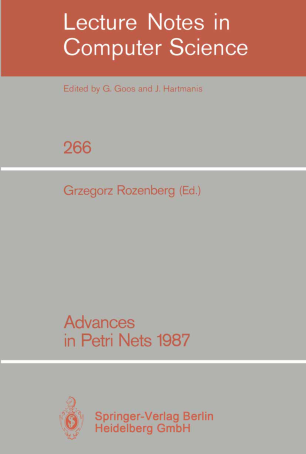 APN: European Workshop on Applications and Theory in Petri Nets

The aim of these series of volumes "Advances in Petri Nets" is to present to the general computer science community the most significant recent results with regard to the development in the area. The main source of the papers are the annual European Workshops on Applications and Theory of Petri Nets"; the highest ranked papers from the past workshops are considered for the series, i.e., they are again reviewed and accordingly revised or extended. In addition to the workshop papers, the "Advances" also present invited papers. The present volume Advances in Petri Nets 1987 covers the 7th "European Workshop on Applications and Theory of Petri Nets" held in Oxford, Great Britain, in June 1986. It also contains a survey on complexity of problems related to Petri nets written by R.R. Howell and L.E. Rosier. A special feature of this volume is a bibliography on Petri nets, containing more than 2000 entries.