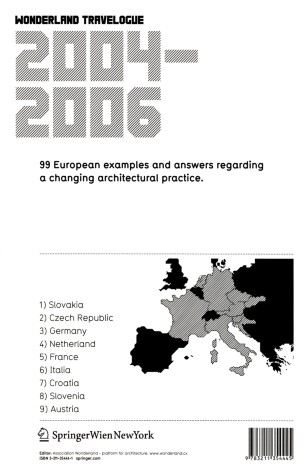 99 European examples and answers regarding a changing architectural practice

The Wonderland architecture exhibition toured Europe from 2004 to 2006. At every stop 11 national teams – mostly young, unknown teams – joined the exhibition and presented their work along with the others already featured. The exhibition, which began in Austria and grew continuously, will close where it originated in June 2006. The collection of contributions is both a catalog and travelogue in one: each of the 99 participating architecture teams is introduced with both images and texts. The essays give accounts of the architectural developments in the different countries from the perspective of local architecture experts and contain both a retrospect and forecast of the events surrounding the individual exhibitions.

The aim of the architecture platform is to encourage networking between young European architects. The project was subsidized by the European commission and will continue after the project period. www.wonderland.cx