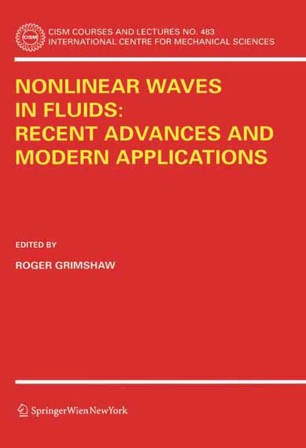 Although nonlinear waves occur in nearly all branches of physics and engi­ neering, there is an amazing degree of agreement about the fundamental con­ cepts and the basic paradigms. The underlying unity of the theory for linearized waves is already well-established, with the importance of such universal concepts as group velocity and wave superposition. For nonlinear waves the last few decades have seen the emergence of analogous unifying comcepts. The pervasiveness of the soliton concept is amply demonstrated by the ubiquity of such models as the Korteweg-de Vries equation and the nonlinear Schrodinger equation. Similarly, there is a universality in the study of wave-wave interactions, whether determin­ istic or statistical, and in the recent developments in the theory of wave-mean flow interactions. The aim of this text is to present the basic paradigms of weakly nonlinear waves in fluids. This book is the outcome of a CISM Summer School held at Udine from September 20-24, 2004. . Like the lectures given there the text covers asymptotic methods for the derivation of canonical evolution equations, such as the Kortew- de Vries and nonlinear Schrodinger equations, descriptions of the basic solution sets of these evolution equations, and the most relevant and compelling applica­ tions. These themes are interlocked, and this will be demonstrated throughout the text . The topics address any fluid flow application, but there is a bias towards geophysical fluid dynamics, reflecting for the most part the areas where many applications have been found.