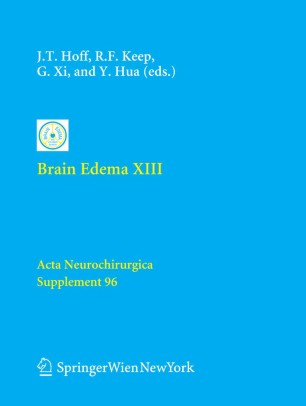 The XIII International Symposium on Brain Edema intracerebral hemorrhage, including the primary event and Tissue Injury was held June 1–3, 2005, in Ann Ar- and the secondary injury that follows, prompted a o- bor, Michigan, USA. This volume includes papers pre- day satellite conference on the subject. The conference sented at the symposium as well as papers that were was held immediately after the Brain Edema Sym- presented at a satellite Intracerebral Hemorrhage Con- sium. Most participants in the Brain Edema Sym- ference on June 4, 2005. In keeping with the outstand- sium stayed an extra day to learn about the latest - ing XII Symposium held in Hakone, Japan in 2002, we velopments in intracerebral hemorrhage research, chose to include brain tissue injury as well as brain including ongoing clinical trials and basic research - edema as the subject matter for this meeting. Brain vestigation focusing primarily on the secondary events edema, in many respects, is a marker of underlying which develop after the hemorrhage. pathological processes which include tissue injury There was considerable enthusiasm to continue the from many diseases. Brain Edema Symposium series at the conclusion of The scienti?c sessions included invited speakers, the thirteenth meeting. The Advisory Board chose oral presentations, poster sessions, and panel discus- Warsaw, Poland as the next site for the meeting under sions.