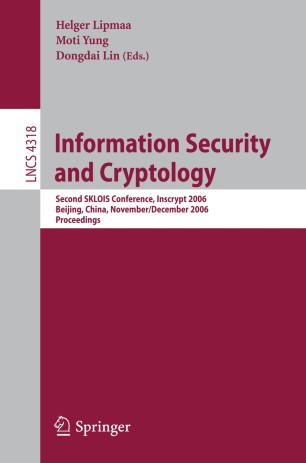 The second SKLOIS Conference on Information Security and Cryptology 2006 (Inscrypt, formerly CISC) was organized by the State Key Laboratory of Inf- mation Security of the Chinese Academy of Sciences. This international conf- ence was held in Beijing, China and was sponsored by the Institute of Software, the Chinese Academy of Sciences, the Graduate University of Chinese Academy of Sciences and the National Natural Science Foundations of China. The c- ference proceedings, with contributed papers, are published by Springer in this volume of Lecture Notes in Computer Science (LNCS). The research areas covered by Inscrypt have been gaining increased visibility recently since modern computing and communication infrastructures and app- cations require increased security, trust and safety. Indeed important fundam- tal, experimental and applied work has been done in wide areasof cryptography and information security research in recent years. Accordingly, the program of Inscrypt 2006 covered numerous ?elds of research within these areas. The International Program Committee of the conference received a total of 225 submissions, from which only 23 submissions were selected for presentation at the regular papers track and are part of this volume. In addition to this track, the conference also hosted a short paper track of 13 presentations that were carefully selected as well. All anonymous submissions were reviewed by experts in the relevant areas and based on their ranking, technical remarks and strict selection criteria the papers were selected to the various tracks.