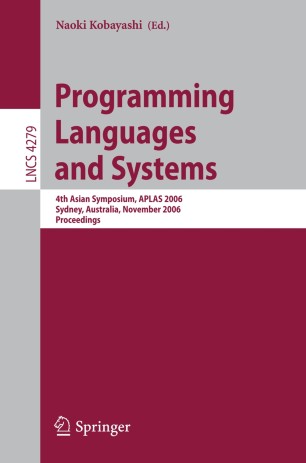 This volume contains the proceedings of the 4th Asian Symposium on Progr- mingLanguagesandSystems(APLAS2006),whichtookplaceinSydney,Japan, November 8-10, 2006. The symposium was sponsored by the Asian Association for Foundation of Software. In response to the call for papers, 70 full submissions were received. Each submission was reviewed by at least three Program Committee members with the help of external reviewers. The ProgramCommittee meeting was conducted electronically over a 2-week period. After careful discussion, the Program C- mittee selected 22 papers. I would like to sincerely thank all the members of the APLAS 2006 Program Committee for their excellent job, and all the external reviewers for their invaluable contribution. The submission and review process was managed using the CyberChair system. In addition to the 22 contributed papers, the symposium also included two invited talks by Jens Palsberg (UCLA, Los Angeles, USA) and Peter Stuckey (University of Melbourne, Melbourne, Australia), and one tutorial by Matthew Flatt (University of Utah, USA). Many people helped to promote APLAS as a high-quality forum in Asia to serve programming language researchers worldwide. Following a series of we- attended workshops that were held in Singapore (2000), Daejeon (2001), and Shanghai (2002), the ?rst three formal symposiums were held in Beijing (2003), Taipei (2004) and Tsukuba (2005).