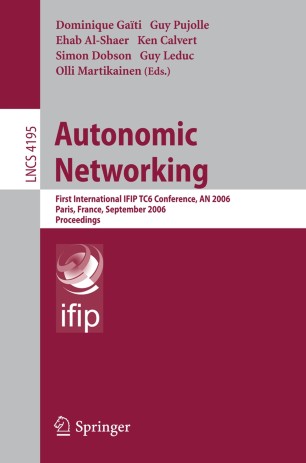 The autonomic communication paradigm has been defined mainly through the Autonomic Communications Forum (ACF) and particularly as follows: Autonomic communication is centered on selfware – an innovative approach to perform known and emerging tasks of a network control plane, both end-to-end and middle box communication-based. Selfware assures the capacity to evolve; however, it requires generic network instrumentation. Selfware principles and technologies borrow largely from well-established research on distributed systems, fault tolerance among others, from emerging research on non-conventional networking (multihop ad hoc, sensor, peer-to-peer, group communication, etc. ), and from similar initiatives, such as Autonomic Computing of IBM, Cognitive Network of DARPA, Harmonious Computing of Hitachi, Resonant Networking of NTT, etc. A visionary network would be able to (a) configure and re-configure itself, (b) identify its operational state and take actions to drive itself to a desired stable state and finally (c) organize the allocation and distribution of its resources. To build such a network, it is necessary to go beyond the improvement of techniques and algorithms by using a new concept, the knowledge plane. The knowledge plane is able to collect information available in the network to provide other elements of the network with services and advice and make the network perform what it is supposed to. There are many objectives to the configuration and reconfiguration of the network, from the optimization of resources to the use of best available techniques in order to offer the most appropriate service, best adapted to the t- minal capabilities.