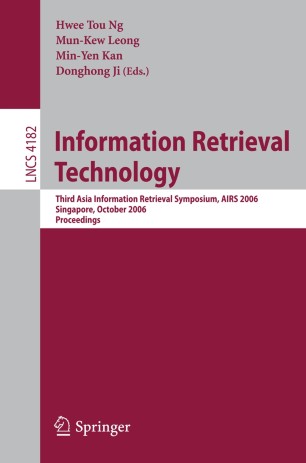 Asia Information Retrieval Symposium (AIRS) 2006 was the third AIRS conf- ence in the series established in 2004.The ?rst AIRS washeld in Beijing, China, and the 2nd AIRS was held in Cheju, Korea. The AIRS conference series traces its roots to the successful Information Retrieval with Asian Languages (IRAL) workshop series which started in 1996. The AIRS series aims to bring together international researchers and dev- opers to exchange new ideas and the latest results in information retrieval. The scope of the conference encompassed the theory and practice of all aspects of information retrieval in text, audio, image, video, and multimedia data. Wearehappyto reportthatAIRS2006received148submissions,thehighest number since the conference series started in 2004. Submissions came from Asia and Australasia, Europe, and North America. We accepted 34 submissions as regular papers (23%) and 24 as poster papers (16%). We would like to thank all the authors who submitted papers to the conf- ence, the seven area chairs, who worked tirelessly to recruit the program c- mittee members and oversaw the review process, and the program committee members and their secondary reviewers who reviewed all the submissions.