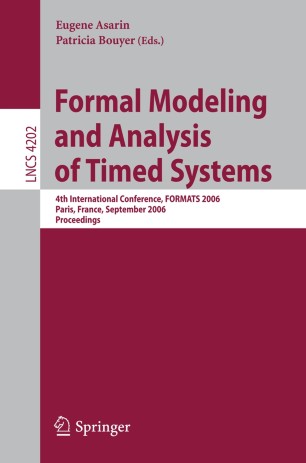 This volume contains the proceedings of the 4th International Conference on Formal Modelling and Analysis of Timed Systems (FORMATS 2006), held in Paris (France) on September 25-27, 2006. FORMATS aims to be a major - nual event dedicated to the study of timed systems, uniting three independently started workshops: MTCS, RT-TOOLS, and TPTS. The ?rst three FORMATS conferences were held in Marseille (2003), Grenoble (2004), and Uppsala (2005). Timing aspects of systems have been treated independently in separate s- enti?c disciplines, and there is a growing awareness of the di?cult problems common to all of them, suggesting the interdisciplinary study of timed systems. The unifying theme underlying all these domains is that they concern systems whose behavior depends upon combinations of logical and temporal constraints, e.g., constraints on the distance between occurrences of events. The aim of FORMATS is to promote the study of fundamental and practical aspects of timed systems, and to bring together researchers from di?erent d- ciplines that share interests in modelling and analysis of timed systems. In this volume, there are articles on: – Foundations and Semantics: contributions to the theoretical foundations of timed systems and timed formal languages as well as comparison between di?erentmodelsusedbydi?erentcommunities(timedautomata,timedPetri nets, timed MSCs, hybrid automata, timed process algebra, timed temporal logics, timed abstract state machines, as well as probabilistic models). – Methods and Tools: techniques, algorithms, data structures, and software toolsforanalyzingtimedsystemsandresolvingtemporalconstraints(mod- checking, simulation, robustness analysis, scheduling, etc).