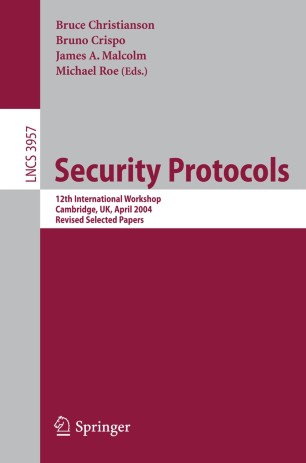 Here are the proceedings of the 12th International Workshop on Security P- tocols. We hope that you will enjoy them, and that they will cause you to think at least one heretical thought. Please write or e-mail and share it with us. Our theme this workshop was “Authentic Privacy.” Traditionally we have based authentication upon a rather strong notion of identity, and have then built other security services on top of authentication. Perhaps if we want a more nuanced notion of privacy, then we need to re-examine some of our assu- tions, particularly when attackers and defenders share the same resources and infrastructure. The position papers published here have been revised by the participants in the workshop, and are followed by edited (heavily in some cases) transcripts of parts of the discussions which they led. Our thanks to Sidney Sussex CollegeCambridgefor the use of their facilities, to Johanna Hunt at the University of Hertfordshire for organizing the logistics of the workshop and orchestrating the production of these proceedings, to Lori KlimaszewskaoftheUniversityofCambridgeComputingServicefortranscribing the audio tapes (in which “viruses without halos” could have caused havoc but didn’t), and to Donald Hunt for impeccable copyediting. Finally, it is both a sadness and a pleasure to pay our tribute to David Wheeler,oneoftheoriginalforty-ninersattheCambridgeComputerLaboratory and author of the initial orders for EDSAC. The second version of initial orders is the Platonic bootstrap.